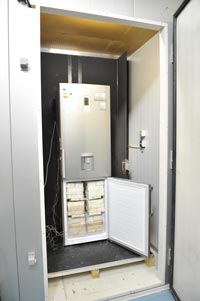 Re/genT has contributed activelyto the IEC SC59M/MT2 team, which has developed a new global standard for testing refrigerators. Since this standard requires some specific, rather complicated, algorithms to analyse and determine the energy consumption, Re/genT developed commercially available dedicated software, which simplifies the analysis of the measurement itself. Upon request more details about this software can be provided.

It needs mentioning the Re/genT is also working on refrigerator projects based on the Supervised Manufacturer's Testing (SMT) principle. For these projects Re/genT performs audits at the manufacturer's laboratory at defined time intervals, whilst the actual testing is being processed by the manufacturer. After completion of the tests, test results are submitted to Re/genT, evaluated in detail and, if approved, published in a test report.